Turn heads and stop traffic with an eye-catching exhibit design.

For many companies about to head off for a trade show, one of the biggest worries is that they won’t be noticed on the show floor. It’s a valid concern, since the vast majority of show exhibit floors are packed with hundreds of competitors – all vying for the attention of attendees.

So in a bustling sea of activity and more booths than anyone has time to visit, how do you make sure that your exhibit stands apart from the crowd and draws in traffic?

Based on what we’ve seen work best lately in terms of drawing a crowd, here are a few suggestions:

Nothing draws the eye to an exhibit space quite like state-of-the-art lighting effects. Whether it’s a roof-mounted spotlight to literally steer conventioneers’ attentions to your booth, colored shifting LED lights (we like to call this “literal eye candy” because people can’t help but look), or some innovative lighted framing to really make that logo and messaging pop, it’s human nature to focus on the best lit object in any given space.

2. Be Stylishly “Pleasing to the Eye”

Think about your average shopping mall and how when you race though it in a hurry certain stores still stick out more than others and potentially draw you in no matter how pressed for time you were. Whether you are there for it or not, there’s a good chance you notice (and likely visit) the Apple store. They’ve done an excellent job capturing a sleek contemporary and inviting store and clearly stand out visually alongside any other stores they might be sandwiched between. The same philosophy can be applied to your booth space. Simple, modern, clean, subtle-colored, well lit and uncluttered is one current recipe for booth traffic gravitational pull success. Check out our latest style guide for some of the hottest trends going today and see which best match your brand messaging.

As an extension of recommendation #2 above, “smoothly uncluttered” should be the name of the game for signage as well. For many trade shows attendees who have been walking up and down long aisles bathed in bright fluorescent lighting, a bleary-eyed numbness can set in. Their heads turn from side to side, glancing for a split second at each booth as they keep on walking. One thing that can stop them is clear and easy-to-read messaging. Your logo and signage (containing concise statements that directly connect the reader to your company’s purpose or value proposition) should be front and center, the less words the better. Don't overload messaging because if they can't figure out what you are about in the time it takes to glance at your booth, they'll likely keep walking.

Another fact of human nature to take advantage of at trade shows is that people tend to notice the tallest exhibits first. The bottom line is that you want to be spotted, and one way to stand out is with a hanging sign that represents your brand. More and more of your competitors are probably using the hanging sign strategy as well, so take yours to the next level by making it a moving or spinning sign. If there are 10 hanging signs in your area of the convention floor and only one is moving, it’s definitely going to draw the most attention. Another way to be seen and win the height-factor sweepstakes is to include a tower structure as part of your exhibit. If you have an island exhibit, accompany it with the maximum height tower that the show floor allows.

5. Appeal from the Ground Up

Trade show booth flooring is often incorrectly considered a triviality. It’s actually an important feature that ties a whole booth together and can even be a lure for passers-by. And we’re not talking about the standard grey show floor carpet that screams “me too.” Think a beautiful hardwood that matches well with the rest of the booth. Not only does it draw people in, it provides a psychological “at home” feel that relaxes peoples and makes them stay longer.

Few attendees will stop by a booth that only offers information they already know or have seen before. Education or entertainment in the booth (or some blend of both) – via a small theater or presentation area will bring people in because they feel they might miss something if they don’t stop by. Intermittent presentations by your company’s most engaging speakers, or special guest presenters or performers will fill seats and keep people in your booth for a significantly longer duration. Promote or give tickets for “the next show” to keep people coming back and/or sticking around.

7. People Power: Be Welcoming and Engaging

The booth is the first thing people will notice, but don’t make the structure do all the work! Your company invested a lot to be at the show, so get the employee team (or some enthusiastic hired help) involved. One of the most important things you can do at a trade show is have your people stand in a location that is accessible and welcoming. Be approachable and go out of your way to make people who seem to be debating whether or not they should stop feel welcome. Have someone from your team greet people who are walking by with a smile and hand them a brochure. Whatever you do, don’t have your people hide behind a counter looking down at their smartphones!

8. Eyes on the Prize

Tchotchkes and giveaways sometimes work and sometimes don’t. The problem is that virtually everyone does it and attendees may just “grab and go” without actually focusing on what you have to say and offer. Better as a draw is a more valuable prize (an iPad Mini, for example) that people can potentially win if they provide their business cards or fill out a small raffle ticket stub or form. That will get them into your space and get them to come back again later to see if they’ve won. Plus, depending on the prize, one to five high end prizes is likely less expensive than coffee mugs or tote bags for everyone.

We’ve seen all kinds of trade show booths over the years – some, obviously, are more attractive and appealing than others. Hopefully by reviewing the tips above, you’ll be on the road to success – just be cognizant of the shows you are attending and the industry you are a part of – there are some categories where certain strategies will work better than others. The real trick is to look at the strategies and suggestions above and think about which ones will fit the spirit of your organization best. You’ll soon be developing a booth that acts like a traffic magnet! 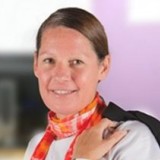 Lisa Bertaina is the President and Co-Owner of ExpoMarketing. Lisa is proud that ExpoMarketing is a platinum certified women's business enterprise by WBENC and hopes to inspire other women in business. In her free time, Lisa enjoys making healthy smoothies, driving, and reading books on leadership, customer service, and business.